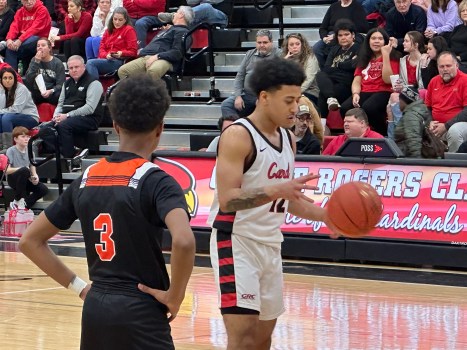 GRC’s Sam Parrish stepped into the foul line during the Cards’ win over district rival Paris. (Photo by Matt Cizek)

At first glance, the atmosphere on Friday night at the GRC Arena might have looked like any other District 40 matchup.

However, it soon became clear that this would be a night to remember for both Lady Card and Card.

“It feels good,” Byars said. “It comes with a lot of [tradition] Behind that name, I try to live up to the standards set by Coach Graham.

Lady Cards had suffered a difficult loss against Frederick Douglass, who rallied for victory on Wednesday night.

They showed signs of a rapid recovery early on, outsourcing the Lady Hounds 16-5 to take an 11-point lead after the first quarter.

But the Lady Hounds, led by 22 points from Sana Jackson, cut their lead in half midway through the third quarter.

Coach Graham went to the bench and called out seventh grader Kylie Chestnut to join the game.

Chestnut scored on his first shot attempt and finished with 12 points after scoring 10 in the fourth quarter as GRC pulled away.

“We don’t just coach the starters or the top six. We coach everyone…you never know when your number will be.” [going to] They call,” said Robbie Graham, head coach of Lady Card. “I know she inspired us…she can definitely knock down some shots.”

With two minutes remaining, Byars, perhaps appropriately, used their defense to create an offense to score.

After stealing the ball, she ran to the basket and scored the conversion on a layup despite the presence of a defender.

After the presentation, the audience gave a standing ovation.

She even received a hug from Paris head coach Aaron Speaks.

“It was an honor to mentor her. [and] To see her reach these milestones,” Graham added. “She’s such a great girl on and off the floor.”

Unfortunately, the result was not the same, losing to the Lady Mustangs by a score of 62-44.

Ciara Byars is the Lady Cards top scorer with 16 points.

From the beginning, they were able to connect aggressively and never looked back.

“We thought we shared basketball,” said GRC Head Coach Josh Cook. [unselfishly], and I also commend our practices. The past few practices have been really good. “

It was enough to overcome the team-leading 14 points of Greyhounds Malachi Ashford as the Card held Paris to 29.8% field goal shooting.

As the game progressed, Card found a familiar sighting when Parrish and Edwards connected in some back alley play.

The result was a series of slam dunks that elicited a very positive response from those in attendance.

“We played [well]We played and performed as a team,” Edwards said.

Edwards has also led the team in rebounds and blocks all season.

“Just watch the ball go up and let the rebound go into your hands,” he said. “They are coming at me and I just block it.”

The Lady Cards and Cards are back in action on Tuesday night with back-to-back games against Bourbon County at the GRC Arena. Ready cards tip off at 6pm and cards start at 7:30pm.